What you need to know about PHP7

PHP7 is the next major update to the PHP programming language that powers most of the internet. It’s upcoming release will mark over 11 years since the initial release of PHP5.

PHP6 was (and still is) a very large and highly publicized project/branch of the PHP project. It is not related to the upcoming PHP7 release and risked creating confusion for both the developers and users alike. A vote was taken from 7/23/2014-7/30/2014 to determine the name of the successor to PHP5 (latest branch being 5.6). PHP7 was selected with 58 votes vs. only 24 votes for calling it PHP6.

Performance improvements and security are the underlying goals of PHP7. In fact, PHP7 has been tested to perform twice faster than the current latest PHP branch (PHP5.6). Specifically for WordPress, the same server can handle more than double the requests/second with PHP7. 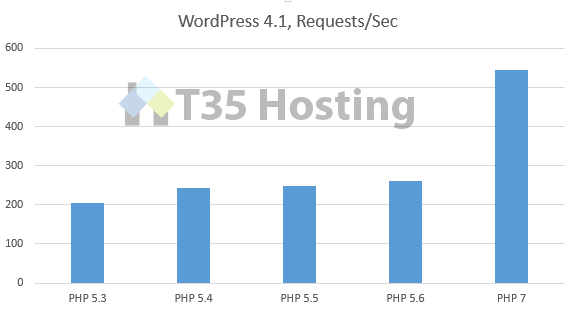 4. Backwards compatibility: Is my script/site compatible?

Being a major release, there is a big potential for older scripts to break or not work properly. Amongst the bigger changes in PHP7, asp-style tags (<% %>) will no longer be supported, so you would have to make sure all the php tags follow the proper format ). Major CMS’s like WordPress, Magento, etc.. already use coded that is compatible with PHP7 so no further action will be needed. However, it’s always useful to keep in mind any custom themes or plugins you installed in your CMS and checking to make sure those are still being maintained and updated.

PHP 7.0.0 was released on 12/3/2015 and then updated to PHP 7.0.1 on 12/17/2015. However, it will take some time for the major hosting platforms to start supporting it. At T35 Hosting, we plan to roll out PHP7 within the next couple of weeks as we finish our own internal testing to make sure none of our clients are negatively impacted. cPanel, the leading hosting platform, is planning on rolling out support for it by the end of February, at which point it will be much easier for web hosts to implement.